Leadership is about setting a personal example (on and off the field!) 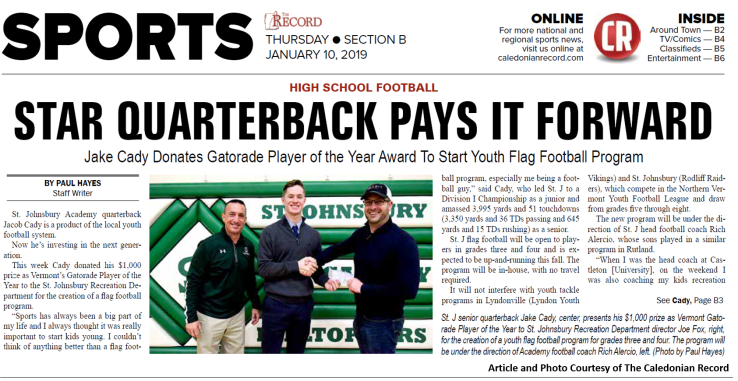 St Johnsbury Academy quarterback, Jake Cady, was a star on the football field and is a star in the community.  After his record-setting senior season which saw him pass for 3,350 yards

and 36 touchdowns and run for 645 yards and 15 touchdowns, he was named as Vermont’s Gatorade Player of the Year.  That award comes with a $1,000 prize to be donated to a non-profit.  Jake chose to donate his prize money to the St Johnsbury Recreation Department for the creation of a youth flag football program that will be open to players in grades three and four.

While participation numbers in tackle football are declining nationwide, the number of children ages six to 12 playing flag football has increased by 38 percent over the past three years.  St Johnsbury Youth Flag Football will follow USA Football’s development model of instilling solid fundamentals, developing better players, providing multiple entry points and game options, and create developmentally appropriate skill instruction.  By teaching the game in a fun and engaging way, we can more effectively meet players’ developmental needs based on their individual stages of growth and development.

I’ve written a number of blog posts commenting on team culture and the importance of leadership on and off the field. Of the willingness to sacrifice and importance of putting the team ahead of oneself. If we build the culture we aspire to and create the true sense of team we’ve worked and hoped for, we produce student-athletes who exemplify the character traits necessary for success on and off the field. There’s no doubt this young man brings extraordinary talent to any team he chooses to contribute to and our players, staff, and school are proud of all he’s accomplished. It’s been a privilege to see him grow as a player, student, and leader. 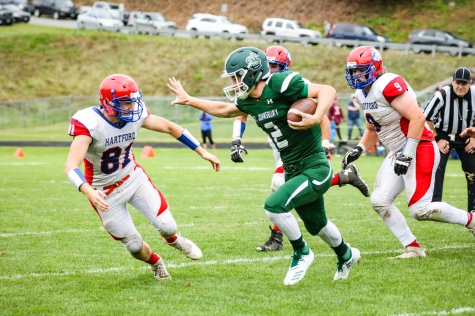 Jake benefited from participating in youth athletics and the impact those programs, teammates, and coaches had on his life.  Now he is investing in the next generation.  Maybe one of these kids will become the next scholarship quarterback and Gatorade Player of the Year.