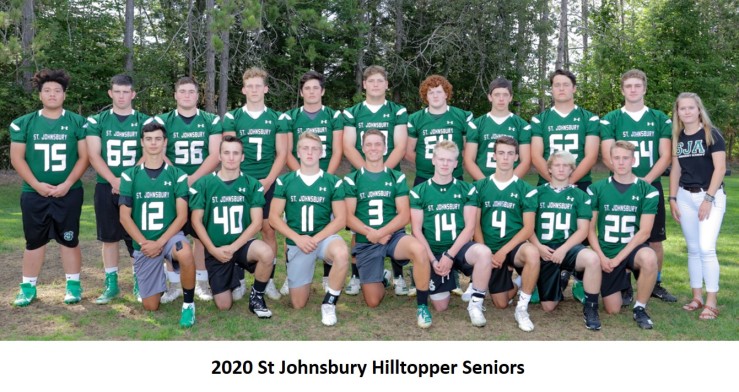 Monday, June 1 is graduation day for the most successful group of seniors in the 125-year history of St Johnsbury Academy Hilltopper Football.

We honor our seniors and all they accomplished during their four years together.  They worked hard, they played smart and they were tough.  We wish them the same success on the paths they take into the next chapter of their lives and trust the lessons they learned and the friendships they forged will last a lifetime.

It’s easy to look at the list above and think someone laid a golden path to such success and these young men had string after string of extraordinary victories. Succeed they did, and repeatedly win indeed, but at the same time, they encountered individual and collective challenges, adversity, and difficulties that sometimes caused them to lean on each other when doubts crept in. It’s the sum of those experiences spanning a full spectrum of emotions that makes them so special.

In Shakespeare’s Henry V, young Harry the King rallies his troops before the battle of Agincourt noting all who stand with him against such mighty odds will forever be remembered.

“…We few, we happy few, we band of brothers;
For he to-day that sheds his blood with me
Shall be my brother;

The Brits went on to win at Agincourt that day and have been remembered for centuries. While these young men may not be immortalized by Shakespeare, they share a bond common amongst those special teams whose exploits are recalled year after year when special events, anniversaries, and feasts are remembered.

Class of 2020, Hilltopper Teammates, you have stood the test, run the race, and fought the good fight. You have earned your accolades and success. You will always be “Brothers!”