I recently received a text from an old friend whom I played against in high school and then with in college.  He was inquiring about how we teach the shotgun snap.  When he was playing next to me in the 80’s I was a 205 lbs center in a split back veer offense with one hand on the ball, the other on the ground, and two hands under my butt.

Shotgun snapping is something I learned as a coach 20 years ago when we went from the I Formation to Spread at The College of New Jersey.  I teach it the same way now that I did then.  The Shotgun snap is faster than a QB dropping the same distance, and it affords the quarterback a wider field of view than when under center, ultimately improving both perspective and ideally decision making.

I will start by saying that if you have a guy who can already snap, do not change him.  Our starting Center the past two seasons could just grip it and reliably rip it back there.  Not 1 bad snap in 2 years…. (Amazing!)  He grabbed the ball with a QB grip and just fired it back there like he was born to the task.  Those guys are rare.  Have a new guy try for the first time and you are going to see balls sailing over your QBs head.

At St Johnsbury Academy, we teach every offensive lineman to shotgun snap.  Just in case…  It not only builds depth in capability but conveys additional responsibility to the lineman and reinforces each players’ potential contribution to the team. (Reinforce teammate interdependence at every opportunity!) 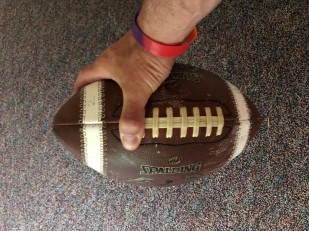 When I teach a new shotgun snapper, I have them grip the ball with their thumb knuckle on the top lace.  Do not have them use a QB grip.  I then have them slightly flex their wrist and lock it.  When their forearm contacts their thigh on the snap, they open their grip.  Taking wrist flexion out of the snap minimizes the opportunity for a ball to sail over the QB’s head.

During last summer’s OTAs we introduced the “back tip grip”.  Our players did not like it.  With the back tip grip, they did not feel they could get their snapping hand back to the strike point of the block after the snap.  The “Thumb-knuckle” grip has worked for 20 years.  No reason to change.  I trust it will work for my old friend’s players as well.