Focus on the Fundamentals…

We begin our summer Organized Team Activities (OTAs) this week.  During the next 6 weeks, my blog will discuss how we teach/train our offensive linemen during that period.  Although we have returning players, we teach OTAs as if it is the first time we are installing it.  While the next few weeks topics are likely a little heavy on X’s & O’s, the focus on fundamentals and establishing a foundation of success is the consistent theme. Back to basics!

During week 1, we introduce our Man Scheme.  Man schemes differ from our Zone and Gap schemes in that we block a particular person regardless of play direction and defender alignment.  In its simplest form, the Guards block #1 on the line of scrimmage (Defensive Tackles in a 4 down front), Tackles block #2 (Defensive Ends).  The Center blocks the middle or backside Inside Linebacker (Mike) often in combination with one of the Guards if their #1 impedes the Center’s path to Mike.  The Running Back blocks the 1st Linebacker to the playside (Sam).

Offensive linemen can use drive blocks or jump sets.  The jump set can only be used if the defender has outside alignment (ex. 3 tech on a Guard or 5 tech on a Tackle).  On the Jump set, the offensive lineman takes a base run step with his inside foot but makes a pass set with his upper body.  The step defends the inside gap.  The show of “high hat and hands” in the pass set invites the defender to get into a pass rush and has him remove himself from his gap responsibility opening up running lanes. 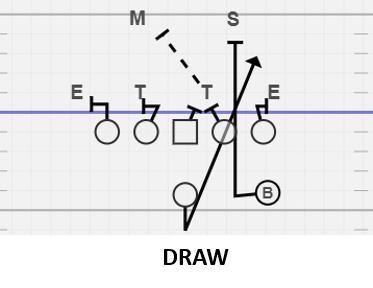 You’ve read here how we reinforce the mantra “Championships are not won on Saturdays in the Fall.” This back to basics approach to teaching fundamentals is the next step in our process of reinforcing who we are and how we think about our roles, responsibilities, and commitments to the team. While understanding and appreciation of individual assignments are imperative to getting the play right, I’m equally focussed on helping teammates recognize their interdependence in pursuit of collective success.